Let’s start with default state of Spanning tree. A real world Spanning tree example. We have 3 tiered network structure of enterprise network. Top of Switch is Access, which is directly connected with the user and middle is Distribution then core switch, at bottom server FARM switches. We don't change anything priority and mac address are the same; now guess who will be the Root Bridge. 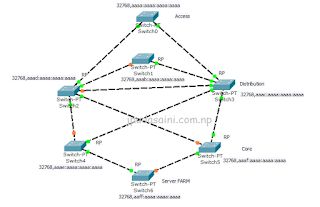 Remember that all switch finds best way to reach Root Bridge and block all other redundant links. Switches think that's the center of the network. Now switches are selecting their root port with the lowest cost path to reach the Root Bridge.

Switch2 directly connected port became Root Port because it has 100M link with cost 19. Just like Switch2, Switch3, Switch4 and other also elect Root Port. Block all other port left over.

Okay let’s remove block port and see the network. That's the real topology of the switch look like. Take a look at this, the problem is what links got block. e.g the major link of distribution(Switch3 to Swtich2) link has been cut off as well as core switch(Switch4 to Swtich2) also cutoff, that’s what we really don't want. 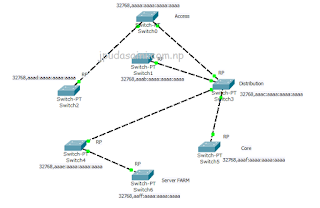 Distribution Switch have a flood of traffic which is forwarded to the Root Bride, the limit of network congestion, that access switch might be low performance with lower quality like Catlyst 2900xl. It may have 100M links with definitely can't handle so much traffic coming from the distribution switch. This could be bottle-necking of the entire network. All is working fine, switch led are blinking green but user feels slow because congestion of the link. A tone of traffic is coming from the distribution switch which causes Root Bridge crashing. That could happen complete network down for 10 to 30 or more. This could depend on how big the network is? That happen because bad Root Bridge has been elected, then what switch had to be the Root Bridge.

The answer is, Core Switchs in the network should be the Root Bridge. So everybody finds the best way to reach the Root Bridge and block other redundant link. That’s the good way to configure the Spanning tree. Make sure you change the priority to lower, so the Core switch can wins the Root Bridge election, don't let mac address break the tie between the switches.

Popular posts from this blog

March 30, 2013
Suddenly I encounter a weird problem with VMware 9 version. I install different OS for my education and testing purposed. Like MAC os, Ubuntu, CentOS, BT, WinXP, Win-server 2003. When I tried to run one of this OS a error message appear. unable to open kernel device "\\.Global\vmx86": The system cannot find the file specified. Did you reboot after installing VMware Workstation? Failed to initialize monitor device. Click ok you can see this window After googling I found one solution in developer forum but thread starter never use that method. So I tried it and here is my finding. Go to the directory of vmware installed  (In my case I run it as Administrator) C:\Program Files (x86)\VMware\VMware Workstation>   ( I've 32-bit apps on 64-bit OS, your may be different) Run this command vnetlib -- uninstall vmx86  reboot Go to the same directory and check net start command - this time it should say "service name  is invalid&quo
19 comments
Read more

August 22, 2014
This tutorial assumed you already create Hotspot in your router. If you don't know how to create a hotspot in Mikrotik router, click here and create the Hotspot. . After successfully creating the hotspot server go to "Files" Menu of  the main Window of Mikrotik router Copy "hotspot" folder into your PC. Open "alogin" file with text editor Replace "link-redirect" text with your desire URL Now you're done! After successfully logging into the Hotspot server your client automatically redirects to your external link.  Don't forget to copy this folder into Mikrotik Router "Files" Menu. You can also drag and drop this folder into "Files" menu.
8 comments
Read more